Dipnetting brings whitefish to the table during the summer months and salmon is also caught this way in the early summer. These local delicacies appeal to visitors.

The whitefish that spawns in the Torne river is called summer whitefish. The whitefish likes its environment clean and rich with oxygen. It belongs to the family of salmon. The whitefish has a silvery colour and a small individual resembles vendace.

Whitefish spawns when the river gets colder. The roe stays on the riverbed over the winter. The fish fry hatch in the spring and make a long trip to the sea in the summer. They grow for 4 to 7 years in the Bothnian Sea and Bothnian Bay area. A full-grown fish often comes back to the river where it was born to spawn.

In the summer the dipnetting begins at Kukkolankoski, just when the whitefish arrives. The season starts as “spring dipnetting” and continues in organized shifts later on. Back in time the catch might have been several thousands of kilos per season so it’s only natural that the whitefish has always been an integral part of the diet at the Kukkolankoski rapids.

Whitefish is a tasty, white fleshed fish with quite a lot of fat. It can be prepared in several ways, both as a filet and as a whole. The most popular methods in the area are smoking and salting. It can also be prepared on a pan, in the oven, in a soup, on the grill…

Anyhow, skewered whitefish is THE dish at the Kukkolankoski rapids. It has been prepared in the similar way on both sides of the border river for centuries. The traditional preparation method is passed on from one generation to another. The villagers and visitors alike have access to a world-class delicacy.

At the Kukkolankoski rapids the dipnetting of salmon goes on from the second week of June to the end of the month. The salmon that is caught here is a traveller like the whitefish. 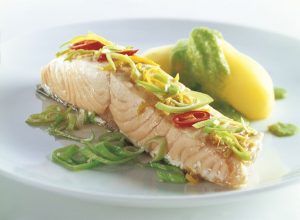 The Torne river salmon grows in the Baltic Sea. After a few years spent away it returns to where it was born. The biggest part of the returning salmon arrive around Midsummer.

Salmon is known as valuable seafood. Its fatty flesh is often red – wild Baltic salmon less so than the farmed Norwegian salmon.

Salmon can be utilised in a variety of ways. Salmon soup is the Lapland classic. It can also be prepared in the oven, on the pan or on open fire, as well as in a smoker. “Gravad lax” is a salted Christmas classic and there is an endless list of international variations: for example Japanese salmon nigiri and Italian carpaccio.